3D Geometries for All

Ammar Mirjan and Mattis Koh founded the ETH spin-off MESH in early 2022. MESH employs robotic fabrication technology to build complex-shaped concrete structures in an efficiant manner. The Zurich-based start-up may still be in its infancy, but can look back on extensive research and experimental work at ETH Zurich. 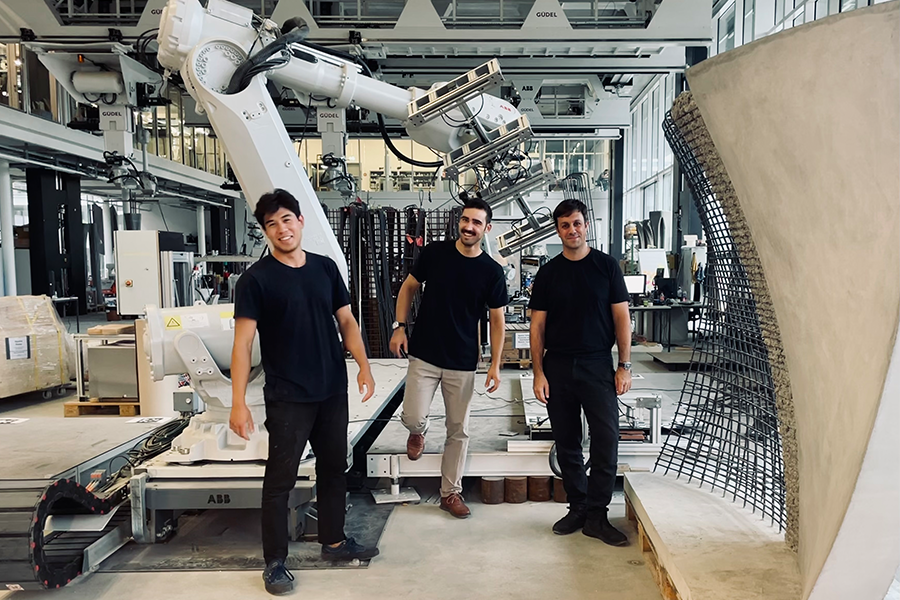 About a decade ago, Norman Hack, then a researcher at Gramazio Kohler Research, developed a spatial 3D printing process for making free-form grid structures, says Ammar Mirjan, CEO of MESH. "The researchers then came up with the idea that the 3D-printed polymer structure could be filled with an additional material, such as concrete, to serve as a lost formwork and principally also as reinforcement," Mirjan adds. This was the birth of the MESH technology.

Interdisciplinary work in the National Center of Competence of Research

When the National Center of Competence in Research Digital Fabrication (NCCR DFAB) was launched in Switzerland in 2014, great potential of the novel fabrication technology was identified. A team of researchers from the fields of architecture, robotics, materials science and civil engineering transferred the spatial polymer extrusion process into a robotic fabrication process for three-dimensional lattice structures with reinforcing bars. "Introducing steel reinforcement into the manufacturing process solved a fundamental problem of digital construction," Mirjan says, "namely, how to integrate a reinforcement system into reinforced concrete structures in a statically effective way."

From demonstrator to industrial application

The technological breakthrough came in 2018 with the robotic fabrication of a curved concrete wall in the DFAB HOUSE in Zurich on top of Empa’s NEST building. "The architectural application of the MESH fabrication technology in a real building was a milestone," says Mirjan. The DFAB HOUSE attracted a lot of attention from the media and also industry, he says. "Although the step from research lab to building site was mastered," Mirjan says, "the technology was not yet widely available to the construction industry." In a further research phase with industry partners PERI and Sika, as well as ETH researchers from Gramazio Kohler Research and Prof. Dr. Walter Kaufmann's Chair of Structural Engineering (Concrete Structures and Bridge Design), the MESH technology was transformed to an industrial application. To finally make the technology available to the Architecture and construction industry, MESH was founded in 2022.

New priorities as a start-up

"By founding the start-up, we broke away from the university, which took a lot of courage from the team," says Mirjan. In addition to developing methods, techniques and applications, he says the move from academia to industry also created new priorities and questions for the team. For example, MESH had to secure start-up funding to purchase machines such as robots. "The MESH production process has a significant hardware component. Thanks to the seed funding, we can scale our technology and accelerate development so that we can establish ourselves in the market," Mirjan says. Currently, Mirjan and his team are focused on acquiring and implementing initial projects and building a production facility. In October 2022, MESH will exhibit at the bauma construction trade fair in Munich. There, MESH has also been nominated for the bauma Innovation Award 2022.

Connect with MESH on LinkedIn.